Many player characters in Magic: the Multiverse will be able to cast spells, of a huge variety. However, they all fall under certain types and effects. This section will outline those differences, how spells are cast and other spell-related effects. A guide for how to translate Magic: the Gathering cards into spells for Magic: the Multiverse is available here.

There are several different types of spell that can be cast in Magic: the Gathering, and they each have different effects in Magic: the Multiverse, to represent the diverse kinds of sorcerous abilities that characters have at their disposal. 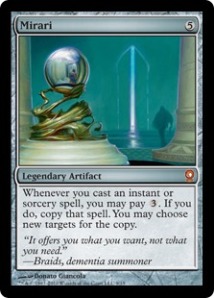 Does it make sense that something as powerful as the Mirari needs “switching on”?

Artefact Spells – These spells represent tapping the power of mystical artefacts, imbuing them with magical energies to use their unique abilities. Casting an “artefact spell” does not represent pulling an artefact through the Blind Eternities in the same way as a creature spell does, rather it is “switching on” the artefact. As a result, artefact spells can only be cast when the artefact in question is in the character’s possession.

Certain artefacts may be so powerful that it seems nonsensical to pay an activation cost for them. This ability may be granted at the GM’s discretion on a case-by-case basis.

Creature Spells – These spells represent real creatures that a character has known and agreed to their service. They have a Power and Toughness equal to the values on their card, and any abilities listed on the card, as well as any knowledge or other characteristics agreed with the GM. Note that they do not have their own mana, and summoners must still pay the cost for the activated abilities of their summoned allies.

Creatures summoned in this way remain with the caster beyond the scene in which they were summoned, if the caster wishes. Note that this might be socially awkward on

occasions – keeping a vicious-looking antelope with you in the middle of a city might keep you safe, but people won’t be opening their doors to you much.

Creatures can be unsummoned by the caster at any time. A player simply declares a one-tick action to send the creature back, and the spell returns to the character’s repertoire, where it cannot be cast for the rest of the scene unless a character possesses multiple copies of the same spell.

Enchantment Spells – Once cast, enchantments remain in effect for the rest of the scene. At the GM’s discretion, certain enchantments may remain for longer, but this should not be the standard. During combat, characters may only cast enchantments after fully-resolved actions; if they wish to cast an enchantment they must take a one-tick action readying themselves to cast the enchantment.

Instant Spells – Instants are spells that are cast and resolve, with no effects staying in play. Instants may be cast at any time during a combat’s tick cycle, even immediately after an interrupted action.

Sorcery Spells – Like instants, sorceries’ effects do not remain in play after they resolve. However, like enchantments, characters may only cast sorceries after other actions fully resolve.

Creature tokens – not spells themselves, creature tokens are æther images of creatures that may result of multiple spell types. Creature tokens function much like creature spells, may never have any other abilities beyond those listed on their card, do not have a will of their own and do not last beyond the scene in which they were summoned.

A Character’s Repertoire and Readied Spells

A player may move spells from a character’s repertoire to their readied spell slots in a non-combat situation at any time. In combat, this is a one-tick action for every spell the player wishes to change. Note that they can still usually only have up to seven readied spell slots at a time, so usually spells will need to be exchanged between the readied slots and their repertoire, unless they have empty slots.

A character with spellcasting abilities may announce they are casting a spell at any point they could perform another action. They announce the spell, the mana is spent and the spell begins to be cast. For each mana emblem on the card, a character needs to pay 1 of that kind of mana, and the numbers represent that amount of mana of any colour is required. If they are in a combat situation, they spend the mana during the first tick of the spellcasting action. If it is interrupted for any reason before it is finished, the mana does not return, and characters may even take mana burn for losing control of the mystical energies they are attempting to harness. This is dealt with in more detail below.

A spell that has been completed is considered to have resolved. If a spell is cast during a combat, the spell takes a number of ticks equal to its converted mana cost to resolve. In a non-combat situation, the GM determines when a spell resolves.

After a spell is cast, the player may opt to remove it from their readied spell slots and replace it with another. For non-creature spells, this is entirely optional.

Mana is divided into greater and lesser forms. Each point of a character’s mana can be either lesser or greater mana, depending on how it is used. Lesser mana is used and regained quickly, to achieve a wide range of small effects. If a mana emblem is expended as lesser mana, put one strike through the circle on the character sheet.

Cast with greater mana, Barter in Blood would force each player to sacrifice four creatures.

Greater mana is used in worldshaking sorcery, and unleashing powerful spells that would otherwise have a far lesser effect. This mana is potent, but replenishes only slowly. If a spell’s cost is paid with at least 1 greater mana, any damage or life loss inflicted by the spell is doubled, or the number of targets or entities involved is doubled. If a mana slot is used for greater mana, put a cross through the circle on the character sheet.

Greater mana is also required for more powerful spells to be cast at all. If a spell requires more than 1 of a particular mana symbol, greater mana must be used in order for it to be cast, 1 for every 2 mana symbols.

Where they could regain different colours of mana, the player may choose which colour they regenerate when the tick cyle or day is up.

Planeswalkers may, as their name implies, cross the Blind Eternities to other planes of existence. This is a spell the same as any other, although it work slightly differently. A description of planeswalking from the Magic: the Gathering website is as follows:

The act itself differs from planeswalker to planeswalker, because each planeswalker’s identity is an essential part of the ability. For one planeswalker, a shamanistic ritual must be performed. For another, planeswalking is the culmination of a long, dreamlike trance. The details of a given planeswalker’s method are dependent on who they are, how much of the Multiverse they have seen, and perhaps most importantly, what color(s) of mana they can wield.

So planeswalking  will always be difficult, regardless of how proficient a spellcaster the ‘walker becomes. To planeswalk, a planeswalker must take a 20 tick action,and spend a quarter of their current total mana pool in greater mana. This amount will of course increase as the character’s mana pool increases. When a character walks in this way, they may choose their destination.

If a ‘walker needs to speed this process up, or as a last resort, she can take a 10-tick action and forsake a quarter of their mana bonds; remove them permanently from their character sheet. This can be done even when the character has no mana available in their mana pool. When a planeswalker walks in this way, the GM chooses their destination.