In Magic: the Multiverse, the players are represented by planeswalkers; beings who has had a spark within them ignited, which allows them to step into the chaos between worlds and travel safely to other planes of existence. In order to build a picture of these complicated individuals, you need a living and breathing picture of what sort of person they are. From here, we can move to giving them attributes to represent their abilities in a more concrete fashion.

These things are what you need before thinking about filling in a character sheet, those things that are unquantifiable but vital to the makeup of any character.

Pre-‘Walking Life and the Spark’s ignition – Who were they before their spark ignited? What skills and personality traits defined them before they became a planeswalker? What did they do? Who were their family and friends? How did they react to the character’s abilities stirring? Do they know about it?

Motivation – each character walking the planes of the multiverse has their own reasons for doing so; this is inextricably linked to the person they were before becoming planeswalkers. What reason do they have for wandering the planes? Do they search for knowledge? Are they driven by vengeance for some wrong done to them or those they care about? Do they seek riches in other worlds? Or are they looking for a home, somewhere amid the swirling chaos of the Blind Eternities to call their own? Your character needs a reason to travel.

Style of magic – this is a rough outline of what sort of magic they use; mind magic (Jace), necromancy (Lilliana, Sorin), illusion (Jace), Pyromancy (Chandra), earth magic (Koth), artifice (Tezzeret, Karn) or natural enchantment (Garruck). If it helps, you could include what colour(s) they use, but it’s not necessary at this stage. The style should be have some relation to their motivation; if they are a fast-talking thief looking for a fortune, they are likely to use magic based on stealth and subterfuge, of hiding things and taking them from others. This should affect what spells the character later selects.

Motivation and magic style should combine to a concise phrase summing up the character concept.

Race – the Multiverse is populated by many diverse sentient races, many of whom can possess the spark. A full list of the races (both sentient and non-sentient) can be found here. A character’s race will give various bonuses and penalties to their attributes, which are listed here.

These two selections can have a large impact on the character, as they influence a character’s spells and their attributes.

Characters’ abilities are defined according to ten attributes, which are related to the five colours of mana. These are as follows:

Intelligence: The ability to think, learn and research in a structured manner. Also a general measure of a character’s “book knowledge”. Characters with high intelligence have probably had some formal education. Intelligence can also be used as a social skill to structure a persuasive argument or to win a formal debate, but this is only likely to be effective in well-educated society.

Finesse: The ability to move quickly and quietly and to perform delicate tasks. Allows a character to sneak around without being seen, to pick locks and pockets, handle dangerous artefacts safely or to perform feats of acrobatics and athletic skill like running and jumping. Some weapons (like daggers or fencing swords) which rely on speed rather than power might also use finesse when they attack.

Charisma: The ability to appeal to the emotions of others, whether through inciting a crowd through oratory, trying to woo someone with love poetry or to make an appeal to trust or friendship. Characters with high charisma will often come across as likeable, personable or genuine (even if they are not) and people will be inclined to trust them or listen to them. Charisma might also cover the physical attractiveness of a character, but the two are not intrinsically linked (so even a very attractive person who lacks confidence or who gives off a cold demeanor can still have low charisma).

Integrity: Integrity represents a character’s mental and emotional fortitude, faith and courage. Characters with high integrity have better control over their own emotions, and are generally less likely to get angry or give in to despair or fear.

Endurance: The sheer physical fitness and resilience of the character. This covers how well they can endure physical trauma or unpleasant or dangerous conditions. Also how long and hard they can do any strenuous activity before becoming tired. It might also be used in a more abstract sense to cover a character’s ability to survive and stay healthy in difficult circumstances, such as when travelling in the wilderness, in which case it also covers the ability to find sufficient food, shelter and other necessities.

Empathy: Covers emotional connection to other people and awareness of the surrounding environment, both physical and social. Characters with high empathy are very good at reading their surroundings, whether picking out clues from a murder scene, tracking an animal or spotting when someone else is lying. Characters with high empathy are not necessarily persuasive themselves (that would be determined by Charisma or Cunning), but they understand people, their emotions and their motivations. Empathy is also very important for dealing with animals and creatures which communicate largely through body language.

Strength: Covers raw power, muscle and physical training, including the ability to fight (whether unarmed or with weapons) or to accomplish feats of strength such as lifting a heavy weight or breaking down a door. Long periods of manual labour, however, would fall under endurance.

Acuity: Covers the ability to think and act quickly and clearly, especially under pressure. Should play a key role in determining initiative in combat. While dexterity measures how fast a character can move when running or jumping, acuity measures how fast a character can react. Might allow a character to do things like hide quickly before another character enters the room, or to dodge an arrow fired at them. Depending on other stats, characters with high acuity may come of as impulsive or twitchy.

Conviction: Conviction indicates how capable a character is of shutting out or ignoring distractions like pain and hunger, as well as more abstract distractions like doubt or the attempts of other characters to dissuade them. Characters with high conviction may still have poor impulse control or be cowards (represented by low integrity), but they will do whatever needs to be done to accomplish their goals and won’t be put off by hardship or failure. Characters with high conviction will also tend to be decisive people with strong personalities, which may be a good or bad thing.

Cunning: Cunning indicates how good a character is at getting their way. Whereas charisma represents general personableness and charm, cunning represents the ability to use outright threats, lies or appeals to a person’s baser nature to manipulate them. It doesn’t rely on the character being particularly nice or charming, as it’s more a set of techniques than any particular comment on the character’s personality (beyond the fact they’re a bit of a bastard). On a more general level, cunning might also represent the ability to generally play dirty, such as forging a signature, plotting a crime or cheating in a game of cards.

The character has a starting mana pool of 5, which can be split any way among the five colours of mana, the magical force that binds the whole multiverse together. For a brief summary of the colours of mana and their affiliations, read this. More in-depth articles on blue, white, green, red and black mana are also available.

Mana selection is important, as it forms the basis of all characters’ abilities, not just magic use. Mana forms the keep pools for related attribute tests, as listed above. For more details on attribute tests, see the Game System section.

Attributes can be given any value, up to a maximum of ten. To begin with, assign attribute bonuses based on your character’s mana and the below wheel. For each point of mana, you can give 2 attribute points to linked attributes, or 1 point to an adjacent attribute. 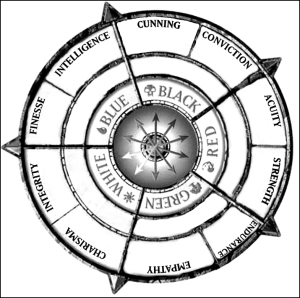 Example: A character with 3 blue and 2 black mana can have either 6 points in Finesse, Intelligence, Cunning or Conviction. The same character could also have up to 3 points in either Acuity or Integrity.

If a character wished to mix both linked and adjacent attributes, then they could have 1 point of Acuity, 2 points of Cunning and 2 points of Intelligence.

Once this is done, you can then assign 15 dots to any attributes you wish.

While your character’s race may have been chosen earlier, now you must decide one and assign the attribute pros and cons of each to your character. A full list of races and their bonuses and penalties can be found here.

Each race has an affiliation with certain colours, which are listed alongside their bonuses and penalties. A character must have at least one of a race’s affiliated colours to be of that race.

So you’ve decided that your character is a leonin. Or a goblin. Or a vampire. Or any of a myriad of races. But what do they do? This is the role of the character type. It determines whether a character is a cleric, a warrior, a shaman or any of a long list of types. The full list is available here.

Notice that this list does not define your character; just because your character is a samurai it doesn’t mean that they necessarily wear feudal Japanese armour and follow the code of Bushido. It simply gives them certain abilities, as well as affinities and weaknesses for certain spells.

A character’s type modifies their abilities in the same way as their race, but also determines their starting abilities. While planeswalkers grow to have more in common with each other than those they started life with, they may still retain abilities from their pre-‘walking life, which will shape their development from that point on.

Your character’s life total is equal to their Endurance, plus 5.

A character starts to take wound penalties to their actions after taking damage equal to their Conviction rating.

Example: A character with Endurance 4 starts with a life total of 9. If they also had Conviction 3, the would start taking wound penalties at less than 6 life.

And with that, your character is ready to walk the planes.